Please note that I now spend most of my time with my gundogs and maintain the Touchon & Co site infrequently and as an information resource on a not for profit basis. Donations to enable me to continue running and maintaining this site will be appreciated and can be made here

AFTER VIEWING, USE YOUR BROWSERS BACK BUTTON TO RETURN TO THE PAGE YOU WERE VIEWING.

( This link takes you to a 'Paypal Me' page where if you wish, you can donate any amount in any currency to help with maintaining this not for profit site which is otherwise maintained solely by me at my own expense)

I also love Gundogs, so click the logo above to be taken to one of my Gundog websites.

'I have a large collection of Touchon wristwatches' is not something you will hear very often .........Why ? Because they made hardly any. 'The Complete Price Guide to Watches' by Cooksey Shugart lists a grand total of two different sorts. I currently have six complete wristwatches and a handful of movements after many years of collecting. Every one that I have seen is different to every other one. Restoration of incomplete specimens is virtually impossible, so think twice before purchasing Touchon wristwatch restoration projects.

Those that I have seen have all been very high grade with the exception of a few produced under Wittnauer supervision after the takeover when quality clearly suffered.

A 1930 / 1931 Wittnauer catalogue I picked up some time ago lists six styles of Gents Touchon wristwatches, all with 17 jewel movements and ten styles of Ladies platinum and diamond watches all with 17 jewel baguette movements...... The Ladies specimens ranged in cost from $1125 to $2000 which for 1930 was an enormous amount of money and clearly aimed at the upper end of the market.

They supplied some to Tiffany & Co and one of these examples is shown below.

This one is signed by Tiffany on the dial only but by Touchon on both the case and movement. It has 15jewels and 6 adjustments and is essentially a miniature version of the most commonly encountered 19jewel pocket watch movement. The gear train is rose gold alloy and is a fine piece of watchmaking.

I also have an incomplete slightly larger round caliber which I suspect was also from a wristwatch as I have yet to encounter a Touchon Fob Watch of such small size.Pictured alongside it is a very high grade baguette shape movement similar in many ways to Patek Philippe wristwatches of this type.

Here you will see a range of Touchon & Co wristwatch movements, each one different to the other in varying states of completeness, culminating in the ULTRA RARE Jump Hour wristwatch movement. All of them are beautifully finished and include 15, 17 and 18 jewel models. Some have gilded gear wheels, some have solid Rose Gold wheels, some appear as miniature versions of their pocket watch movements, whereas the Jump Hour takes a form and bridge layout I haven't seen on any other Touchon & Co pieces.

Below is a picture of a Touchon produced after Wittnauer became involved and you can see the overall quality and finsh is just not the same. 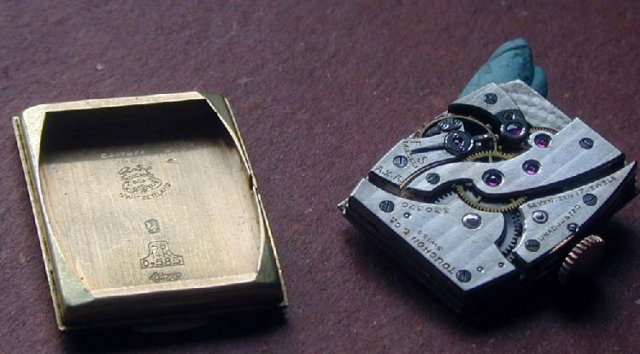